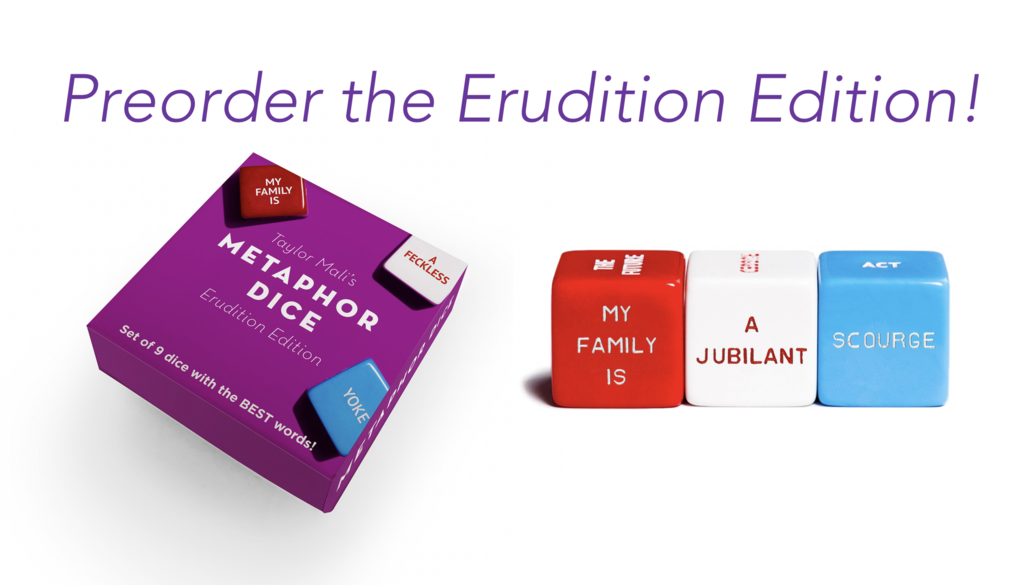 A creation of poet Taylor Mali, Metaphor Dice are available in a 12-dice Starter Set as well as the new 9-dice Erudition Edition, which will be available in the autumn of 2019.

Latest Updates from Our Project:

If you haven't received your dice already, they are on their way to you and will arrive in days!*

They are lovely and wonderful, and the biggest complaint is that the box is hard to open! I am just in love with the final words that we chose, and I hope you will be, too!

Thank you for making this edition of Metaphor Dice another stocking success! We will not be making any new editions for a while, but the two most popular choices were a SANDBOX edition with words more appropriate for younger users and an ARMADA edition full of words borrowed from other languages. So I suspect that if/when we do decide to put out another version it will be a combination edition called SANDBOX ARMADA!

If you have an iOS device, click the icon below to get taken directly to the App Store to start rolling over one million metaphors!

Meanwhile, the physical dice that comprise the ERUDITION EDITION are on schedule to be shipped out in September/October. We have heard from all but 20 backers about where they want their orders sent. Are you one of these folks? If so, click in the box below, enter the email you use with Kickstarter, and you will be taken directly to your survey.

I'm very excited for all the good things happening to Metaphor Dice!

Have a wonderful holiday!

. . . was worth owning the four acrylic D20 prototypes!

Rafael J. Serrano likes to write a poem every day (almost!) with his Magnetic Poetry Kit. Sometimes he mixes in a few Metaphor Dice just for fun. He's a superfan (which autocorrects to SUPERFINE!), so he jumped at the chance to support the new set AND own a bit of Metaphor Dice history! The original D20 prototypes, which I bought across the street at The Brooklyn Strategist, are 5.5cm in diameter, which is a little smaller than a baseball, but HEAVIER! So while they were perfect for explaining the idea of the project and doing some early rolling (20x20x20 yields 8,000 unique metaphors!) they were DEADLY projectiles!

All surveys will be sent out before July 1!

The dice won't be ready to ship until the end of the summer—we haven't even sent them the art file for the directions yet—and who knows what the state of our relationship with China will be then? But today I'll reach out to the expediter to see if they can shed any light on the situation. Stay tuned.

The next round of surveys will be sent out at the end of June.

Meanwhile here is the bottom of the box:

I chose to have the student example be slightly different; instead of going with the obvious "LOSS is a STINGY PAYCHECK," they have flipped it around and chosen to write about "the STINGY PAYCHECK of LOSS." It's only a slight change, but it sends the poem off in a different direction.

Lastly, the original Starter Set of Metaphor Dice continues to sell very well on Amazon and on our website, especially in Canada! Who knew? Perhaps some influential Canadian education blogger had something nice to say recently? I cannot explain it. And we've been giving away a lot of sets as well to teachers who have been following the project but have never been able to buy a set for themselves. And as of a few weeks ago, we have a classy little gold sticker that gets stuck to every free set we give away. They look like this:

That's all for now. Hope summer is starting gracefully for you!

At least, that's what I expect a set of the Erudition Edition of Metaphor Dice to feel like when I finally get to hold one in my hands in a few months.

The new set will be a smaller box, and slightly lighter than the Starter Set (which is 12 dice). The boxes are being printed and the dice are being engraved as I write this. The next step is the directions. Then the QC, packaging, shrink-wrapping, and shipping to our distribution center. We are still on schedule to ship the Early Bird Sets in September and the rest shortly after.

Fulfillment surveys—where you get to indicate where you want your order sent—will go out at the end of June or the beginning of July.

Thank you for being with my on this everyday odyssey.